The United States has a problem. An oil problem. No matter how many wells are drilled oil companies just can't seem to raise production to anywhere near the figures required to reach the holy grail of energy independence.

Looking at the oil production data, active rigs in use and footage drilled over the last forty years it is clear that no matter how much investment is made are there just isn't the size and quality of oil producing fields left in the U.S. any more.

Various news items and opinion pieces have announced that the United States is entering an exciting new era of energy independence. Figure 1 shows that the truth is a bit more sobering. We can see that over the last 40 years the overall trend for crude oil production has been steadily decreasing. There are a few anomalies however. In the late 70’s and early 80’s the rig count climbed dramatically as a response to high global oil prices. This however only produced a very slight increase in oil production over the boom period. Once the bubble burst in 1985 crude oil production continued on its downward trajectory. Rig counts fluctuated wildly until the Asian recession in 1998, recover and then dip again after the Dot-com crash of 2000-2001 and recover again until the beginning of the global financial crisis (GFC) in 2008. This is where things get interesting. As the economy begins to recover after the GFC and rig counts begin rising, U.S. oil production begins rising for the first time in over 20 years. This is due largely to rigs coming online that employed hydraulic fracturing or fracking, the process that enabled oil companies to extract oil from previously marginal areas.

This increase in oil production is what pundits have been hailing as a new era for U.S. energy independence. There are a number of reasons why this is overly optimistic and these will be explored below. 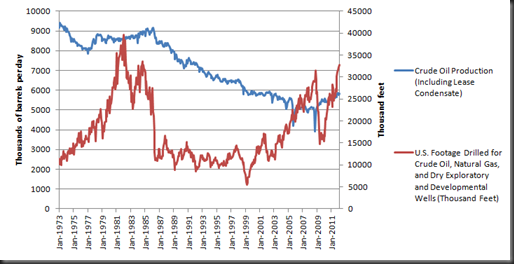 Figure 2 shows footage drilled had been steadily increasing from the early 2000s but fell off during the 2008 financial crisis. Once the global economy began to recover drilling increased sharply to the highest numbers seen since the mid 1980s. The remarkable thing is this: even though drilling is at a 25 year high production has not followed suit. Since July 2009 the drilled footage has increased a whopping 105.5 percent but production has failed to follow increasing by only 7.6 percent. Clearly all is not well in the land of oil and gas. 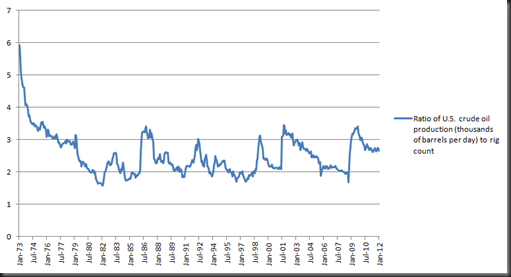 Figure 3 shows that for every active rig in the U.S. today roughly 2700 barrels of oil are produced. This is a far cry from the 5900 daily barrels per active rig at the beginning of 1973. 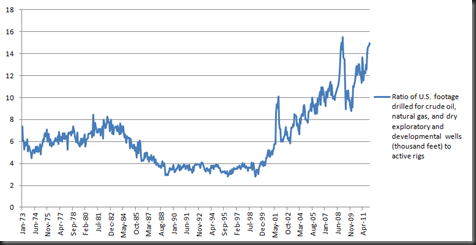 Figure 4 shows that the ratio of footage drilled of all types to active rigs has steadily increased since 1998. This is a combination of both drilling deeper and less exploratory wells being converted into active rigs. It can costs hundreds of dollars per foot to drill so we can see that the U.S. is coming up against increasing inefficiencies with drilling to active rig conversion.

Figures 3 and 4 show that it is without a doubt that the fields being tapped today are of a far lower quality. This means far more capital must be invested in order to produce the same amount of oil as 40 years ago. With the U.S. and global economy still on very shaky ground it is questionable as to where this capital will come from. There are already concerns being raised over a labour shortage in the U.S. oil industry.

“There are just not enough experienced work crews to staff many more rigs coupled with various areas of the country that do not want drilling or servicing rigs working in their backyards.

No one knows how rig counts will react any more. There is only so much iron the oil patch can handle. Rigs and tubular goods cannot materialize that fast. There might be a gradual trend upward, but it’s a slow process. The reality is that rig counts can go down much faster than they can go up.”

So even if there was no looming labour and capital crisis how soon could the U.S. gain oil independence based on current growth figures?

Figure 5: Projected U.S. crude oil production (including lease condensate) based on he trend from January 2009 to February 2012.

The U.S. currently consumes 19,500,000 barrels of oil per day. If we assume that U.S. oil consumption stays the same it will take 80 years for the U.S. to reach oil independence based on the production trend from the last three years (Figure 5), unless the active rig count increases dramatically which as we have seen above is unlikely in the current economic climate. If the U.S. hopes to grow its economy in any real sense (financial abstractions in the tertiary economy don’t count) it is clearly a ridiculous assumption that  oil consumption will not grow at the same time.

As with all future predictions only time will tell. But I am willing to bet that the only way that the U.S. will gain oil independence is by the economy contracting and jobs being lost. This is clearly not a winning platform for politicians to gain votes and so we will continue to see these Polyannaish statements based on little more than hope that the U.S. is on the brink of an energy revolution. The hard facts are more difficult to argue with but that won’t stop those trying to gain office and favour with the oil industry from promoting the idea of business as usual. Let’s hope they wake up before things get really bad.

Posted by Southern Limits at 9:47 AM