Mind the Gap: The Difference Between Brent and WTI

There is much talk in the media about “oil prices” especially when it begins to hurt consumers at the fuel pump. Prices are sometimes referred to as  Brent crude or West Texas Intermediate (WTI) or sometimes just as oil. So what does this all mean and what are the differences?

Brent crude is sweet light oil sourced from fifteen fields in the North Sea. “Sweet” refers to the sulphur content. The lower the sulphur content the easier it is to refine. “Light” refers to the ability of the oil to flow freely which makes it easier to transport and refine. In comparison oil from the Alberta tar sands is considered to be heavy as it is transported as diluted bitumen (dilbit) and is much more difficult to refine.  WTI is lighter and sweeter than Brent with a sulphur content of 0.24% compared to 0.37%. WTI is sourced from around North America and priced from the trading hub of Cushing, Oklahoma. 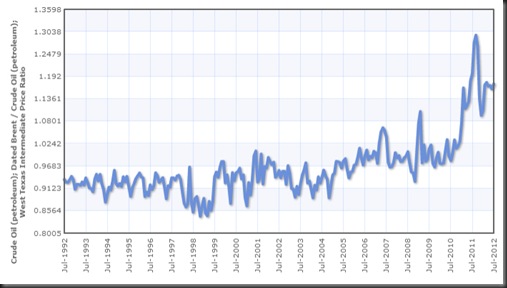 Figure 1: Monthly ratio of the nominal price of Crude Oil (petroleum); Dated Brent divided by the price of West Texas Intermediate. From Indexmundi.

Historically Brent prices lagged behind WTI until Brent began selling for more than WTI in the early 2000s for the first time. Since then Brent has gradually pulled away from WTI and was trading at a US$17.81 premium at the time of writing.

Goldman Sachs expects WTI to close the gap with Brent in the near future as shipments into Cushing slow, decreasing supply. This does not bode well for global oil prices with Goldman Sachs also predicting that Brent will reach US$120 in the next three months due to field maintenance in the North Sea and European market optimism.

Traditionally WTI has been used as the international benchmark for oil prices but over the last few years Brent has overtaken WTI in importance. This is backed by a 2007 report from the now defunct Lehman Brothers that WTI was no longer a gauge for the international oil market. As Cushing is landlocked it is restricted by pipeline capacity which has led to an supply glut over the past few years. WTI is not traded in any significant quantity outside North America.

Steve Austin at OilPrice.com: “Brent is the real international benchmark.Two-thirds of the oil consumed in the US is Brent, and two-thirds of international crude is priced to it. Still the media and market persist in quoting WTI, rather. This is a US singularity, like the non-adoption of the metric system.”

Figure 2: Oil production from the North Sea, based on EIA data. From Our Finite World.

North Sea oil production peaked in 1999. Even with record high oil prices since 2007 production has not been turned around. Oil companies have been in dispute with the British government over tax rates since 2011, responding by cutting production by 18% which lead to a £2.3bn drop in tax revenues. Since a government u-turn on the tax arrangement, investment in the North Sea is expected to increase from £8.5bn last year to £11.5bn this year.

This decreased output from the North Sea has raised grumblings that Brent is no longer a true indicator of global supply and demand either. But there is currently no viable alternative and so it looks as though Brent is set to stay as the global benchmark for sometime to come.

Posted by Southern Limits at 12:38 PM