Drilling Faster Just To Stay Still: A Proposal To Use ‘Production Per Unit Effort’ (PPUE) As An Indicator Of Peak Oil

Within the fields of harvest and fisheries management catch per unit effort (CPUE) is one method that is used to determine the health of a biological resource. The underlying assumption is that as a population declines it becomes harder to catch and therefore CPUE decreases.

Effort can be measured in a number of ways. In fisheries this unit of effort could be vessels in a fishery, days fished, hours fished, number of tows or sets in a season or any number of other units of measurement. Theoretically these should all show similar results.

As a very basic example of CPUE, if in the first year a vessel fishes 10 hours per day for the season and catches 4,500,000 kg of fish and in the second year still fishes 10 hours per day for the season and catches only 2,000,000 kg of fish the CPUE has dropped from 5000 kg/hr to 2778 kg/hr. A standardised CPUE would show a drop from maximum catch of 100 (the maximum of the data set) in the first year to 56 in the second year. A drop of almost half.  All other things being equal this would give fisheries managers reason for concern as the effort has stayed the same while the catch has decreased. However, an increase or no change in catch can also sometimes mask an underlying problem. If in the second year the vessel fishes 15 hours per day for a season and still catches 4,500,000kg the CPUE drops to 3333 kg/hr. This is a standardised CPUE of 67. This represents an increase in effort for the same amount of catch.

There are a number of limitations to CPUE in fisheries management that largely come from fish stocks being highly mobile, impacted by a number of environmental conditions, disease and predation from other species. That being said, what if we applied the concept of CPUE to a non-biological resource such as oil? What if instead of catch per unit effort we calculate production per unit effort (PPUE)? This is exactly what I am proposing and what the rest of this post will address.

I have standardised the PPUE figures below so that they can be easily compared across all regions. The basic calculation is simply to divide the production figure (thousands of barrels per day) by the corresponding unit of effort for each year. This is then standardised by dividing each figure by the largest figure in the data set and then multiplying by 100 to assign a ranking of 1 to 100. A PPUE of 100 represents a minimal amount of effort for the maximum amount of production while a PPUE of 1 represents a large amount of effort for minimal production. Obviously it is in the best interests of oil producing nations to be at the upper end of this scale. From what I have calculated below this is by and large not the case. The majority of regions around the world are facing falling PPUE which signals one thing: oil is getting harder and harder to get out of the ground. If this is indeed the case then high oil prices are here to stay and will only continue rising in the future.

By taking oil production figures from the 2012 BP Statistical Review (includes crude oil, shale oil, oil sands and NGLs) along with international active rig counts from Baker Hughes and calculating the PPUE we can compare how each region is faring.

We can see that PPUE for most regions peaked around 2000. The big exceptions being Canada in 1992 and Europe and Africa in the mid 2000s. What this means for the majority of the world is that in little over ten years the average number of barrels of oil a single rig produces has almost halved. Put another way oil companies have had to double the number of rigs in operation just to maintain oil production at 2000 levels. This is the very definition of drilling faster just to stay still.

World PPUE has dropped almost 50% since 1999 after a steady climb from 1981 up to 1999. Despite huge investment individual wells are on average producing less oil. 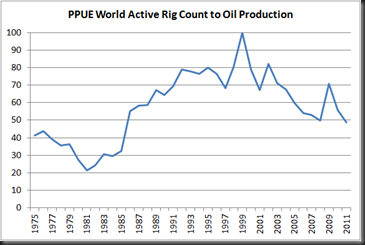 Africa is past peak PPUE. 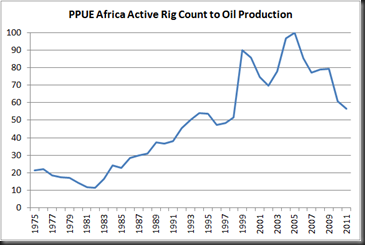 Asia Pacific is past peak PPUE. 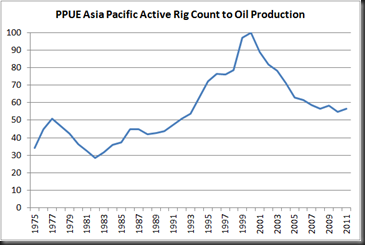 Canada is past peak PPUE. It appears that after Canada’s peak PPUE in 1991 it plateaued and bounced around the 40-50 mark for most of the last 20 years. The increase in PPUE in the late 2000s can somewhat be explained by the Athabasca tar sands ramping up production since 2003. Roughly half of Canadian oil production now comes from tar sands oil. 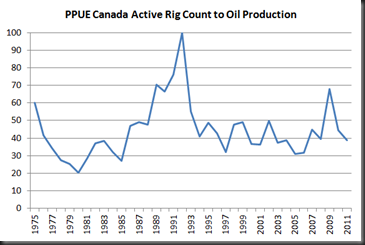 Europe is past peak PPUE. 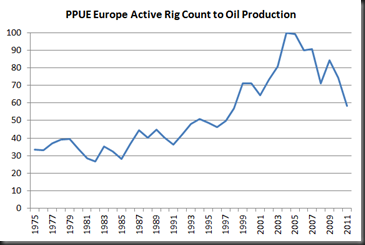 Latin America is past peak PPUE. 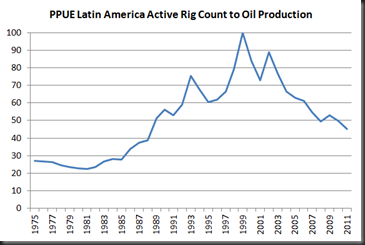 The Middle East is past peak PPUE. The dip from 1979 onwards can be attributed to the Iranian Revolution which severely disrupted global oil prices. OPEC countries made huge profits by reducing production and keeping the price of oil high during this period. 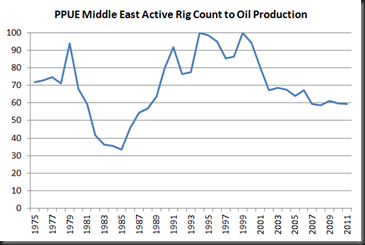 The U.S. is past peak PPUE. The massive rise in the PPUE from 1981 onwards is the other side of the coin showing the impact of the Iranian Revolution. We see a short term rise in PPUE after the global financial crisis but this gain appears to largely now have been lost. 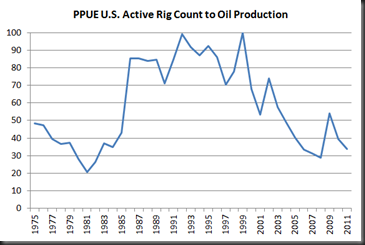 If we then look specifically at U.S. data (because it’s the easiest to find) we get similar results no matter which unit of effort is chosen.

All oil production figures are from the BP Statistical Review of World Energy 2012.

The average depth of wells is getting deeper and yet greater oil production is not reflected by this increase in effort. 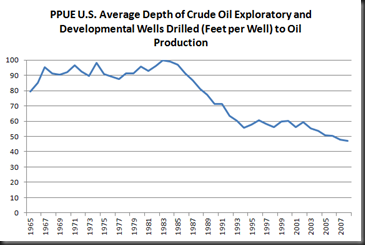 The increased number of crude oil rotary rigs in operation has not helped oil production either. 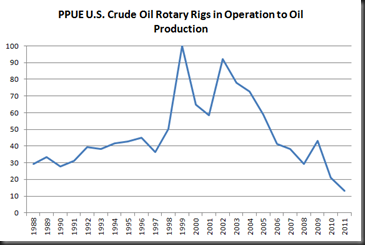 The two graphs below both essentially show the same picture. The cost of drilling per foot has skyrocketed since 2000 driving up the cost of each individual well. Unfortunately the EIA data cuts off at 2007 so we can’t see the impact of the global financial crisis. If well costs are anything like production levels it is likely that the cost fell considerably after 2007 and then climbed back up to to pre-GFC levels. 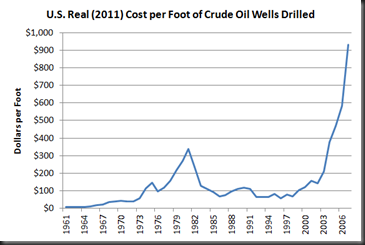 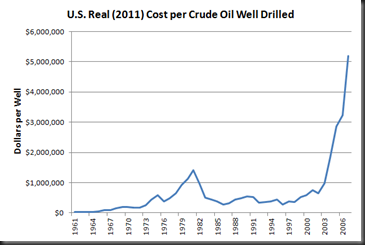 When the above two graphs are converted to a standardised PPUE we see the same trend as other all other metrics. As costs per well and per foot drilled have continued upwards production has not followed suit. 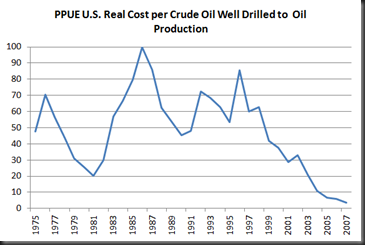 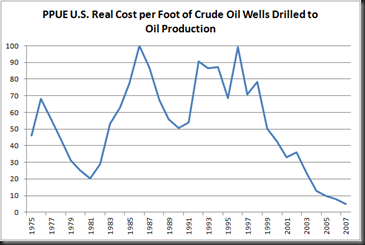 Now it may be that I have missed something fundamental and PPUE is completely useless as an analytical tool. Or it may be that it just needs a tweaking of inputs. No doubt there are some harvest management experts out there that can point out where I have gone wrong. I have outlined a few issues I have identified below that I have some doubts about.

I in no way think PPUE represents the whole picture but see it as supplementing other methods already out there such as EROEI. I welcome comments and criticisms.

For deeper reading on issues surrounding CPUE there are two excellent papers here and here.