I am a keen cyclist. When I lived in Vancouver last year I would cycle the seven kilometres to and from work six days a week during the warmer months. Unfortunately my job here back in New Zealand doesn't allow for cycling (I spend weeks out at sea on fishing boats) but I still try to get out on my bike as much as possible. Cycling has many advantages over other forms of tranpsort: it's free exercise, it's fun, in many cases it's faster (I could easily beat the bus over my seven kilometre ride to work) and it's environmentally friendly.

But hang on. Just how environmentally friendly is cycling and just how feasible is it in a post-peak world? It is true that once you buy a bicycle the day to day maintenance is negligible aside from a few subtle tweaks here and there. Fuel costs depend on how and what you decide to eat. But in terms of construction bicycles aren't quite as green as they first look and it's certain that at some point in the future modern bicycle production will cease to exist. Steel-alloy frames and rims, rubber tires and tubes, steel wires for brake and gear cables and all the other components are mass produced in factories that consume a huge amount of energy.

Another environmental concern is where do good bikes go to die? Rubber tires eventually wear out and are impossible to recycle without huge energy inputs. More than likely they end up in landfills where there is risk of slowly leaching heavy metals and other pollutants into the groundwater. There are no natural organisms that can decompose vulcanized rubber and so it takes centuries for tires to break down due to physical processes. Steel components break down much faster with oxidation but can also leach toxins into the environment.

Environmental concerns aside, where did the modern bicycle come from and where is it heading? A stand of safety bicycles at an 1890s tradeshow in  Nelson, New Zealand. Photo courtesy of: http://www.teara.govt.nz/en/bicycles/1/3

The so-called 'safety bicycle' was invented in the late 1880s and led to the first of many popular booms in cycling. It was the first bicycle that resembled the modern day bicycle, employing rubber tires, a chain connecting the back wheel to a crank shaft and equal sized wheels combined with a lower frame that made it easy for people to learn how to ride. By the 1890s domestically produced bicycles had overtaken imports and by 1900 New Zealand had 71 bicycle factories.

By the late 1930s New Zealand had one bicycle for every six people with over 800,000 bicycles imported and many more made locally between 1900 and the 1950s. As car ownership increased in the 1950s the popularity of cycling declined.

Another important step in bicycle evolution came in the 1970s when the ten speed was introduced. As oil prices crept up around the world cycling again became an attractive alternative with ten gears making it much easier to climb hills and cycle into the wind. During this period 90 percent of all bikes sold in New Zealand were domestically made but after the lifting of import restrictions in the late 1980s cheap Asian imports priced local manufacturers out of the market.

Today almost all of our bicycles are imported from overseas. They are made in highly automated factories that consume huge amounts of energy such as this Cannondale factory in the United States. It is obvious that in the coming years as high fuel prices begin to bite more and more people will turn again to bicycles as their main form of transport much like the days before individual car use became affordable in the 1950s. In fact we are already seeing that as cities put in place cycling infrastructure such as a 70 percent increase in cycling in London in 2010.

But what is also obvious as high oil prices push up the price of other commodities is that modern mass-produced bicycle manufacturing can't and won't exist in the future. It is likely we see a resurgence in local bicycle manufacturing, the same as what will happen in many other sectors. 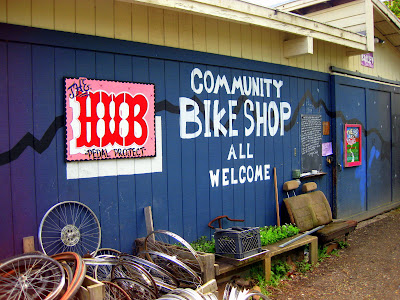 There will also be an increasing need for second-hand bicycle shops and collectives such as The Hub Community Bike Shop that I visited in Bellingham, United States last year.

From a long term sustainability viewpoint an area of interest is the development of wooden and especially bamboo framed bicycles. The great thing about bamboo is that it grows well almost anywhere with no required inputs and it grows quickly. Professionally manufactured bicycles can set you back thousands of dollars but there is also real potential to build one yourself at a relatively low monetary and energy cost. Initiatives such as the Bamboo Bike Project already exist in bringing low cost bamboo bicycles to the masses in Africa.

So we may be able to build bicycles for a long time yet but where will we ride them? Not many people stop to think how reliant modern cyclists are on automobile infrastructure. Richard Heinberg writes in The End of Growth that where he lives in Sonoma County, California, 90 percent of roads are being left to deteriorate and gradually return to gravel as there is no money for continuing upkeep. It is likely that this will also be a trend elsewhere as the 'business as usual' approach comes up against hard resource limits.

All in all cycling is a long way from peaking. The massive resurgence in the popularity of cycling has a long way to go yet. There is however no doubt that in the future our bicycles will more likely be a mixture of bits and pieces that we scrape together from the local bike co-op rather than a shiny new Cannondale. And while that might not be so good for Cannondale it will do both our health and the planet a lot of good.
This post was inspired by Chris @pavementsedge and his blog post 'Peak Bicycling'

Posted by Southern Limits at 7:09 PM